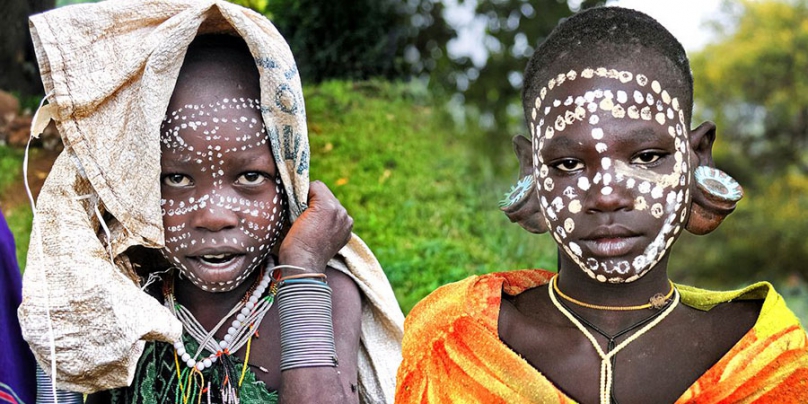 The Surma people live in the remote southwest corner of Ethiopia. The Surma have a basic subsistence and barter economy. Their wealth is based on their cattle, and the main food source is the produce from their own crops. There is very little outside trade. The Surma are a highly monolingual and homogenous society, living beyond most of the influences of the modern world and its technology.

The girl pictured here shows some of the typical Surma characteristics for both men and women: large earplugs, decorative body painting, the hair shaved in patterns. Women wear a leather garment fastened at one shoulder which encircles the waist like a skirt. Men and children typically wear no clothing. Surma women are noted for the large clay lip plates worn in the lower lip.

Donga : is a stick fighting festival of the Surma young men. At a fight, each challenger is armed with a hardwood stick. Each player beats his opponent with his stick as many times as possible with the intention of knocking him down, and eliminating him from the game. Players are usually unmarried men. The winner will be carried on a platform of poles to a group of girls waiting at the open field. The winner holds the privilege to ask among those girls for his own wife.